Although all televisions are fundamentally the same, there are specific considerations when choosing a suitable brand and model for a hospital environment.

Televisions in hospitals can be used in patient rooms, on swing arms, as digital signage and for public viewing. Each of these applications comes with distinct technical factors depending on what is needed for that setting and use.

Here, I’ll focus on patient room TVs and five things to keep in mind when choosing what’s best for your hospital.

Using a typical TV off the shelf from a big box store is not a great option in commercial and healthcare environments. Off-the-shelf TVs have very limited uses, when hospitals need them to do much more than only display linear TV programming.

Healthcare-grade TVs incorporate a means to integrate to a nurse call system. This allows a pillow speaker to be used for basic television control.

Healthcare-grade TVs also are often made to integrate to patient engagement systems, such as the SONIFI Health iTV system, without need for an external box because software and hardware components are built into the television during the manufacturing process.

This integration could consist of a “smart” TV app that runs on the operating system used by the television, or it could be proprietary hardware/firmware circuitry that is built into a “non-smart” television.

As more smart television models enter the market and become more affordable, the decision between using a smart TV versus a non-smart TV tends to be a factor when deciding whether to replace televisions to add functionality, such as a patient engagement system.

For some patient engagement tech providers, the smart television is the least complex method to add functionality to the system, as it eliminates the need for boxes and adapters to route wired controls from the pillow speaker.

For SONIFI Health, the flexibility of built-in technology with or without smart capability shifts the attention from what hardware is needed at the television. Instead, we look at the age of the television and the type(s) of cable that are present to deliver programming and patient engagement services to the television.

Enabling casting, which streams content from an application on a personal mobile device onto a TV, and the control the television from a mobile device should also be a consideration in choosing a TV type.

It may seem that streaming would require a smart TV, but this is not necessarily a requirement.

With mobile devices becoming a necessary component of PX and communication for patients, it is good to keep in perspective if your existing or new televisions could support these mobile features from the onset or at some point during their years of service.

It’s important to remember that after 5–7 years of service, it will be time to prepare for TV replacements. Your teams should be ready to replace televisions here and there as they fail at a steady, and sometimes uncomfortable, pace until they’ve all been replaced.

Budgeting and planning to replace the televisions at regular intervals can make a big difference when it is weighed against the inconvenience, impact on PX and interruption of clinical workflows when a TV in a patient room fails.

Other factors to consider, particularly in the case of adding functionality, include:

Pairing existing and/or new televisions with a system that cares for all of these needs over the life of the television, without the need to physically visit each TV after it is initially installed, is a massive savings of time and resources.

It is important to think ahead of ongoing needs once you’ve chosen the patient room televisions.

Have questions about what TVs might be right for your facility?

Editor’s note: This article was originally published on July 9, 2019. It has been updated for comprehensiveness and freshness. 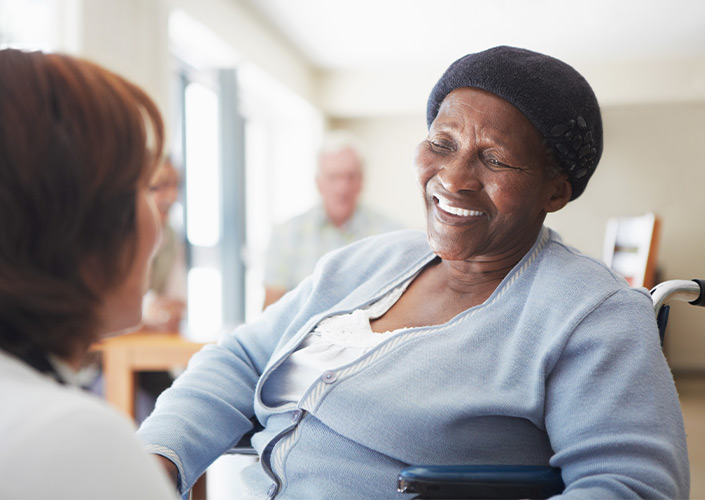